Several years ago our neighbors put their home on the market as they had decided to build a new one. Fred & Jane were the best of folks and always kept their garden in pristine condition. She was always willing to share cuttings and we had many good talks about the garden and plants in general. Around the lamp-post in their front yard was a large planting of iris and wrapped around the lamp-post itself was a beautiful ‘Lady Banks’ (R. banksiae lutea) rose. Its beautiful yellow blossoms  joined with daffodils and forsythia each year to herald the arrival of spring on our lane.

Not long after Fred & Jane moved, our new neighbor moved in. Don’t misunderstand me, our neighbor is a great guy. He has a heart of gold and is one of the nicest people I know. He will readily admit though, that he is not a gardener. I went out early one Saturday morning after he moved in. Lawn mowers and weed wackers were buzzing around the neighborhood and I saw him busily working in his yard. Then i noticed that he had just cut that lovely Lady banks rose to the ground with the weed wacker!  I struck up a conversation with him and in due course explained that the plant he had just hacked to ground zero level was indeed a species rose that if left to its own devices would once again reign supreme over his lamp-post….. We laughed and he said he would leave it alone. I told him that being a species rose that it only blooms on previous years growth, so he would now have to wait two years for blooms…

This morning I went out to get the paper and to my great delight saw the first blooms on this rescued rose ever so gently creeping its way up around the lamp-post again. 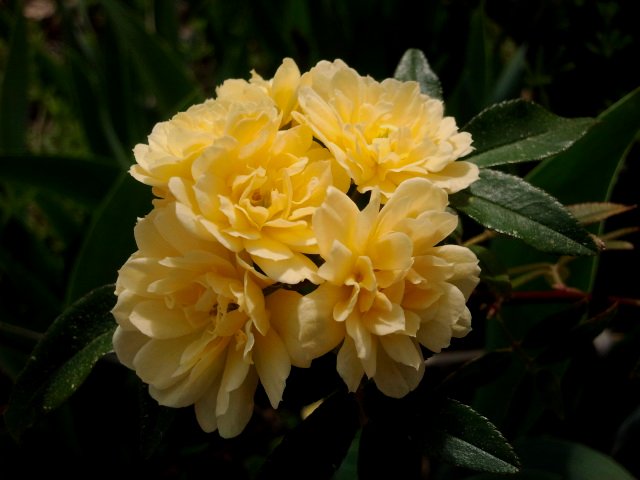 What’s that saying, “God is in His heaven, Jesus is on the throne, and the Lady Banks rose is once again heralding springtime on the lane… All is right with the world….”

Christopher R. VanCleave – America’s Favorite Rose Gardener Nicknamed "The Redneck Rosarian”, Chris VanCleave is passionate about gardening and growing roses. He is an active member of the Birmingham chapter of the American Rose Society, serving two terms as President. In 2007, he created the Rose Chat Podcast which has reached over a half a million listeners with news and information on growing on growing the world’s most beloved flower, the rose. He was a contributor to the 2015 Southern Living Gardening Book, has appeared on P. Allen Smith’s Garden Home television show and was featured in the June 2015 issue of Southern Living Magazine. Locally, Chris serves as Chairman of the Helena Alabama Beautification Board where he has spearheaded efforts to create a sustainable landscape in one of the top one hundred places to live in the United States. His writing is seen at About.com and on his popular website; RedneckRosarian.com, where he chronicles his gardening adventures and explores an intrinsic mix of life, faith and gardening. An agent of change with over 20 years’ experience in process innovation, Mr. VanCleave is leading the charge to reinvigorate horticultural societies and helping them to reach their full potential in the social media age.
View all posts by Chris VanCleave - America's Favorite Rose Gardener →
This entry was posted in #roses, Alabama, Lady Banks, Rose Report, Stories and tagged Lady Banks Rose, nature, plants, R. banksiae lutea, Rose Rescue, Species Rose, Spring 2012, yellow blossoms. Bookmark the permalink.