I was delighted to see our first bloom of Winchester Cathedral this morning. I purchased this rose at the Birmingham Botanical Gardens Spring Plant Sale in April. It was in a two quart pot and I left it there until the end of May.  I finally planted this rose alongside two shrubs of Mary Rose.  Winchester Cathedral is actually a sport of Mary Rose which is a delightful pink rose and the two should blend beautifully together.  This first bloom is highly fragrant. 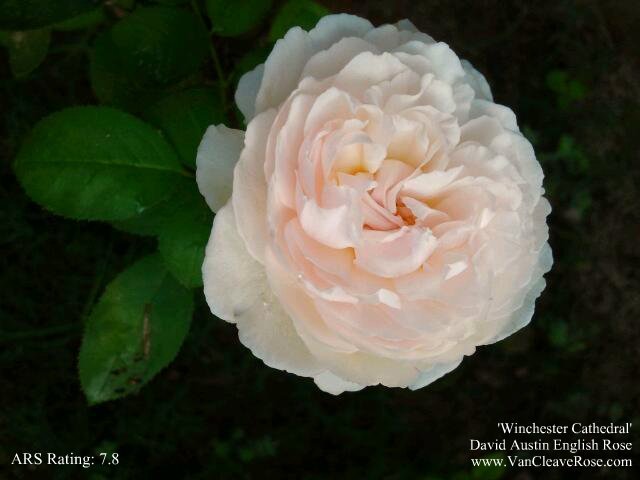 As with all other David Austin roses, this rose needs time to settle into the garden and put down some roots. I will feed it with generous amounts of MooPoo Tea to help establish its root systems and promote growth above ground too.

This rose was named for the breathtaking Winchester Cathedral in Hampshire England. Steeped in history, Queen Mary Tudor (Henry VII’s daughter) married Phillip of Spain in the Cathedral in 1553. Most notable of its departed inhabitants is the beloved Jane Austen. She is interred in the nave with just a simple gravestone that bestows her personal virtues but makes no mention of her writing.

Christopher R. VanCleave – America’s Favorite Rose Gardener Nicknamed "The Redneck Rosarian”, Chris VanCleave is passionate about gardening and growing roses. He is an active member of the Birmingham chapter of the American Rose Society, serving two terms as President. In 2007, he created the Rose Chat Podcast which has reached over a half a million listeners with news and information on growing on growing the world’s most beloved flower, the rose. He was a contributor to the 2015 Southern Living Gardening Book, has appeared on P. Allen Smith’s Garden Home television show and was featured in the June 2015 issue of Southern Living Magazine. Locally, Chris serves as Chairman of the Helena Alabama Beautification Board where he has spearheaded efforts to create a sustainable landscape in one of the top one hundred places to live in the United States. His writing is seen at About.com and on his popular website; RedneckRosarian.com, where he chronicles his gardening adventures and explores an intrinsic mix of life, faith and gardening. An agent of change with over 20 years’ experience in process innovation, Mr. VanCleave is leading the charge to reinvigorate horticultural societies and helping them to reach their full potential in the social media age.
View all posts by Chris VanCleave - America's Favorite Rose Gardener →
This entry was posted in #roses, Alabama, Rose Report, Rose Reviews, Winchester Cathedral and tagged Alabama, beautiful roses, Birmingham Botanical Gardens, British History, David Austin roses, England, English Roses, Great Cathedrals, Hampshire, Helena Alabama, Jane Austen, nature, personal virtues, plants, Prince Phillip Of Spain, Queen Mary Tudor, roses, travel, vacation, Winchester Cathedral. Bookmark the permalink.