A Queen & Queen In Waiting – On Canvas

I have long had a keen interest in the British Monarchy. It intrigues me that they have an unbroken line of succession dating back hundreds of years. This type of continuity is the be admired. With the recent marriage of Prince William and Katherine, now the Duke & Duchess of Cambridge the line of success is once again secure. Each member of the aristocracy at some point are given the opportunity to pose for official portraits that will immortalize them on canvas. A recent unveiling of the first portrait of Katherine, the Duchess of Cambridge caused quite a stir, as It depicts the future Queen as her “natural self” and not as a monarch dressed in full royal regalia. The portrait commissioned by the National Portrait Gallery, is the first in what I am sure is to be many many more. Portraits capture a moment in time and mark a place in history and will, for those closest to the subject, evoke fond memories of times past.

Roses for many years have been recognized the world over as the queen of flowers and its small wonder that for centuries they have captured the attention of monarchs around the world. The British Monarchy has for many years had a particular interest in roses. Queen Victoria sent flowers from Frogmore in 1892 to be entered in the Royal Windsor Rose & Horticultural Society annual show and in 1894 gave a silver cup to be presented to the best amateur entry. To this day, Her majesty Queen Elizabeth II is patron of this esteemed group.

I had the great honor this summer of having a rose from my garden immortalized on canvas. Gifted artist and friend Sue Hemann painted a water color of a bloom of ‘Social Climber’, a lovely pink climbing rose that blooms on the fence in our garden. Her efforts on our behalf to create this “portrait of a queen” will forever stand as a reminder of the enduring legacy and the everlasting beauty of the queen of flowers, the rose. 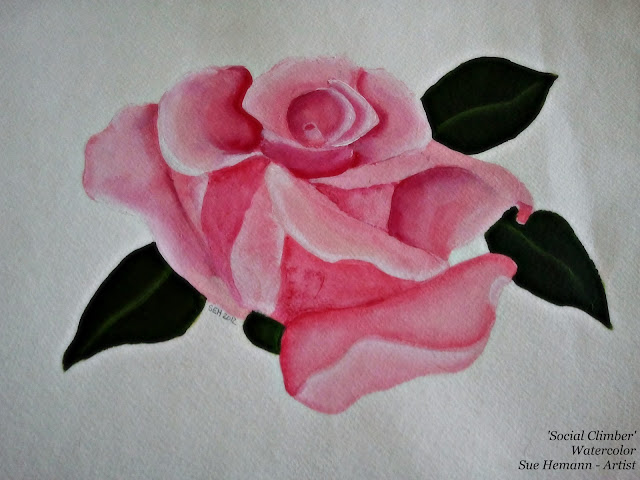 Christopher R. VanCleave – America’s Favorite Rose Gardener Nicknamed "The Redneck Rosarian”, Chris VanCleave is passionate about gardening and growing roses. He is an active member of the Birmingham chapter of the American Rose Society, serving two terms as President. In 2007, he created the Rose Chat Podcast which has reached over a half a million listeners with news and information on growing on growing the world’s most beloved flower, the rose. He was a contributor to the 2015 Southern Living Gardening Book, has appeared on P. Allen Smith’s Garden Home television show and was featured in the June 2015 issue of Southern Living Magazine. Locally, Chris serves as Chairman of the Helena Alabama Beautification Board where he has spearheaded efforts to create a sustainable landscape in one of the top one hundred places to live in the United States. His writing is seen at About.com and on his popular website; RedneckRosarian.com, where he chronicles his gardening adventures and explores an intrinsic mix of life, faith and gardening. An agent of change with over 20 years’ experience in process innovation, Mr. VanCleave is leading the charge to reinvigorate horticultural societies and helping them to reach their full potential in the social media age.
View all posts by Chris VanCleave - America's Favorite Rose Gardener →
This entry was posted in #roses, Alabama, Art, Social Climber, Uncategorized and tagged arts, British Monarchy, climate, climbing roses, Duchess of Cambridge, illustration, nature, Paintings, plants, Queen of Flowers, Rose portraits, roses, Roses in Art, Roses in history, Royal Portrait, royal portrait gallery, Royal Portraits, social climber, Sue Hemann, Watercolors, William & Katherine. Bookmark the permalink.

7 Responses to A Queen & Queen In Waiting – On Canvas