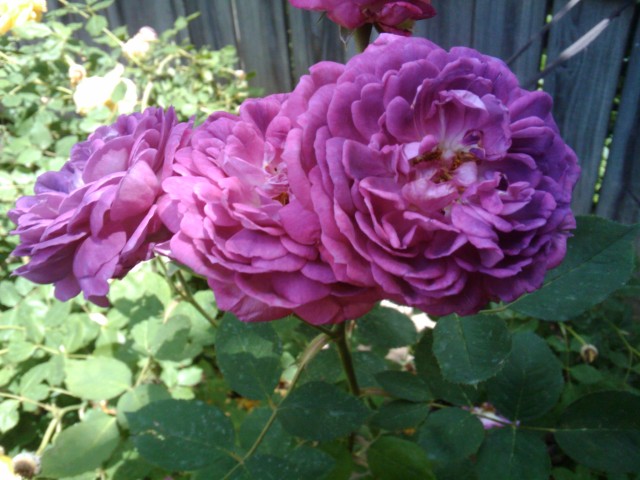 I love old roses. They are resilient, fragrant, put on a big show in the garden and are generally pleasing overall. I am not a big fan of purple and lavender roses.  This rose however, has captured my heart.  I have a friend who grows the most wonderful old roses and helped me to realize the beauty of these roses. Now he’s just an old grouch..Seriously..

I think my love of British history, the Elizabethan and Victorian eras in particular drew me to the hybrid perpetuals. This rose was introduced in 1860. Queen Victoria was on the throne and the industrial revolution had begun. A new “middle class” was emerging in the UK.  The ability to have your own rose garden became a reality for many and the popularity of rose shows was in swing, many new roses were being introduced. It is said that in 1894 Queen Victoria took quite an interest in rose shows herself and presented a silver cup to be awarded to the best amateur. The winner of that cup had their roses taken to Windsor Castle and were displayed on her majesties dinner table. In 1899 she visited the show herself  and presented another challenge cup. *

This is probably the most fragrant rose in my garden. I see an awesome flush of bloom in the spring and have just this year seen some repeat bloom. All in all, a great garden rose!

Christopher R. VanCleave – America’s Favorite Rose Gardener Nicknamed "The Redneck Rosarian”, Chris VanCleave is passionate about gardening and growing roses. He is an active member of the Birmingham chapter of the American Rose Society, serving two terms as President. In 2007, he created the Rose Chat Podcast which has reached over a half a million listeners with news and information on growing on growing the world’s most beloved flower, the rose. He was a contributor to the 2015 Southern Living Gardening Book, has appeared on P. Allen Smith’s Garden Home television show and was featured in the June 2015 issue of Southern Living Magazine. Locally, Chris serves as Chairman of the Helena Alabama Beautification Board where he has spearheaded efforts to create a sustainable landscape in one of the top one hundred places to live in the United States. His writing is seen at About.com and on his popular website; RedneckRosarian.com, where he chronicles his gardening adventures and explores an intrinsic mix of life, faith and gardening. An agent of change with over 20 years’ experience in process innovation, Mr. VanCleave is leading the charge to reinvigorate horticultural societies and helping them to reach their full potential in the social media age.
View all posts by Chris VanCleave - America's Favorite Rose Gardener →
This entry was posted in National Rose Month, Reine Des Violettes and tagged Hybrid Perpetual, National Rose Month, Reine Des Violettes, roses. Bookmark the permalink.